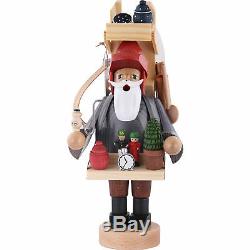 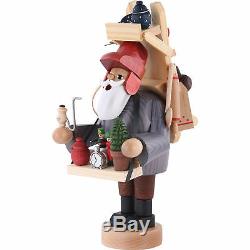 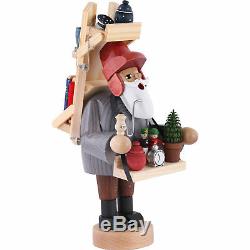 BRAND NEW KWO INCENSE SMOKER PEDDLER 9. HANDCRAFTED IN THE ERZGEBIRGE REGION OF GERMANY. Product Information - German Christmas Smoker. The History Behind German Smokers. For over five thousand years now, incense, just like gold, spices and gems have always been some of the most precious gifts that were given to kings and emperors.

It has also been closely connected with religion. In fact, the bible mentions the Three Wise Men offering gold, frankincense and myrrh. The festivity of the Three Wise Men is still celebrated in Germany every year on January 6th. All of this together with superstition made people believe that the evil spirits of the Raunaechte (longest nights of the year) could be driven away by noise and light. Once these evil spirits had left the house, they would burn incense to bless the home. They would take incense to every room in the house on Christmas Eve, New Years Eve or the feast of Epiphany in hopes of driving off evil spirits. After the 30 year-religious war (1618 1648), that was fought in Germany, the medieval piety and folk art combined to bring about new ways of burning incense. Smokers, also known as Rauchermann were born. Smokers are traditional handcrafted wooden items that started in the Miriquidi Forest which is now known as the Erzgebirge Mountains. Many years ago the Erzgebirge Mountains were mined for gold, tin ore and other minerals. The people that would work in the mines during the day would often be found crafting wooden toy figurines at night. Eventually, when finding gold in the mountains started to become scarce and the mines started closing, many of the miners became full time wooden toy makers.