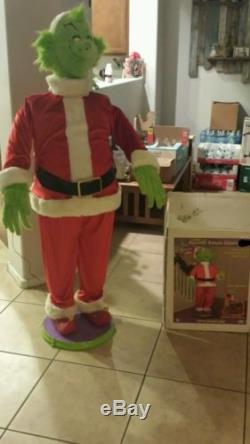 The Grinch stands 5ft when popped up into position. And collapses for easy storage. He sings and dances to the Grinch theme song and has several different sayings. Includes a microphone so you can sing along with him. And of course includes the AC power adapter.

Does not include an AUX cord, although it has the capability to be hooked up to one. This Grinch is in fantastic shape and again hardly ever used.

Everything is just fantastic on him. O boxes or APO's.

The seller is "chris321az" and is located in Apache Junction, Arizona. This item can be shipped to United States.